The command lines are a powerful tool that can be used for many things, including interacting with your computer and running programs. It’s an efficient and time-tested way of doing things – but it’s not always the easiest to use.

That’s where graphical user interfaces come in! GUIs are attractive, easy to understand, and generally more intuitive than CLIs.

In this article, we will explore what GUI and CLI mean, how they work differently from each other, and which one you should choose for different situations.

GUI or Graphical User Interface is a type of interface that allows users to interact with the computer using graphics.

Windows and most modern operating systems use GUI where they can click on buttons, icons and menus instead of typing commands in the command-line interface (CLI).

Many companies have GUI to make their software easier to understand and use for beginners.

CLI or Command Line Interface is a type of interface that allows users to interact with the computer by inputting commands. This interface has been around for a while and is used extensively in operating systems such as Unix, which require you to type commands to use the computer.

CLI is not for beginners and can be a little harder to navigate or use.

For this reason, in the modern-day and age, many companies use GUI instead of CLI since it is easier.

The Difference Between GUI and CLI

GUI is slower than CLI.

GUI is easier to use than the CLI, but not as powerful, whereas CLI has more power and flexibility for experts or those that want it.

Using a command-line interface (CLI) can often be much faster than working with graphical user interfaces (GUIs). This is because GUIs are generally slower to implement and because GUIs tend to have more features.

The memory needed to run a GUI is greater than that for CLI.

The learning curve of CLI is higher than GUI because it needs more time and effort, whereas working with GUI is easy and can be learned quickly. 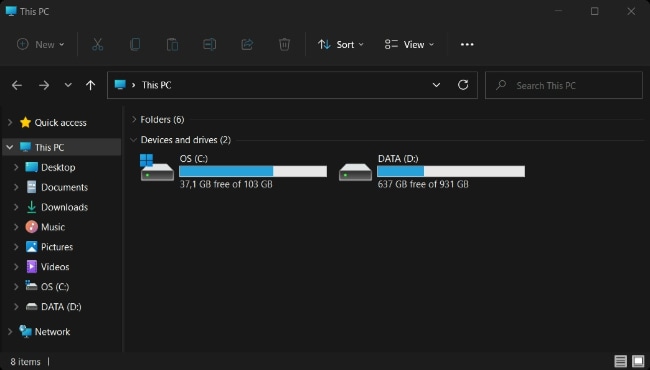 CLI doesn’t offer customizability. The GUI allows the user to take control and make changes depending upon their preferences; this feature makes it more customizable.

CLI only needs a keyboard, while GUI needs a mouse and keyboard.

CLI is the best option for handling complex workflows because it allows users to navigate through simple text commands and construct chains of actions that make up a task.

On the other hand, GUIs are made up of visual components such as buttons or menus, which don’t offer the same level of flexibility.

Advantage of CLI over GUI

CLI is a preferred option over GUI in situations where speed and efficiency are deemed more important than ease-of-use, such as when dealing with large quantities of data or performing repetitive tasks.

Disadvantage of CLI over GUI

The major disadvantage of using CLIs rather than GUIs is that there’s a steep learning curve involved in becoming proficient with the command line.

Additionally, commands must be memorized and input correctly, which can make the process of working with a CLI confusing for people who are not familiar with its syntax.

How Do They Work Differently?

The command line works by passing a series of commands from the user to an interpreter, which then carries out those actions. In some cases, this might require entering several options and arguments that must be precisely typed for them to work as intended.

By contrast, GUIs generally provide various visual tools and components that make it easier for users to see what they’re doing. For example, GUIs often include buttons or menu options that allow users to click on the correct item to complete their task.

What Interface Should I Use?

The best way to determine what interface you should use is by focusing on the task with which the PC needs to be used.

GUIs are generally considered more user friendly but not as fast when compared to CLIs.

CLIs are faster because of the amount of time that doesn’t have to be spent going through menus. The best way you can determine what interface is better for your needs is by testing both interfaces and seeing which one feels more comfortable in completing tasks.

For example: If you are looking to browse through large or complex data sets quickly, then a command-line interface will be more helpful in this case because of its speed benefits over GUIs.

On the other hand, if you are looking to work with multiple data sets, then a GUI will give the user more control over their workflow.

If you’re having trouble deciding between a GUI or CLI, here’s an easy breakdown:

In conclusion, most users will find that GUIs are more intuitive and easier to use than CLIs because of the visual interface that is associated with them.

CLI is better for tasks that require large scale processing of text commands, whereas GUI is good for quick and easy access to resources by users depending upon their preferences.

However, it’s important to note that both interfaces can provide an efficient experience depending on the type of task you need processing.