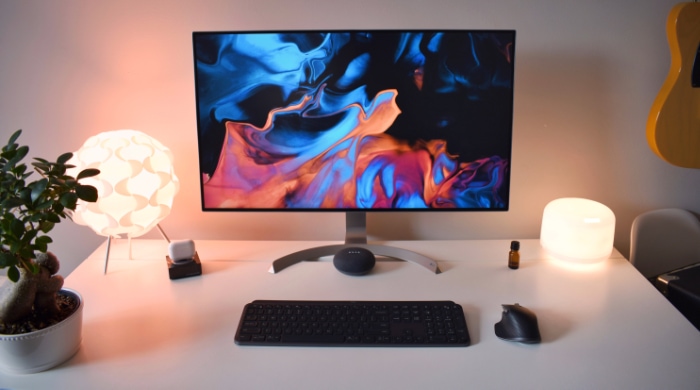 Getting the right audio system for your PC is a hard decision. You need to factor in several things like space available, cost, sound quality, and general accessibility of the device.

You usually get two options for soundbars or speakers when it comes to sound.

What’s the difference between them, and which one is better for you?

Soundbars and Speakers: What Are They?

Soundbars are essentially long bars (hence the name) that have multiple speakers built-in and are capable of producing multi-channel sound.

Some have accompanying subwoofers as well for that much-needed bass. Soundbars are generally much better for smaller setups since you don’t have to clear up space for speakers.

Soundbars are usually the go-to for when your TV doesn’t have that powerful audio and is generally used in living rooms to compensate for the TV’s weak speakers. But that’s not to say that PC users cant benefit from soundbars.

The ease and convenience offered by soundbars can make them an excellent substitute for speakers and even surpass them in some areas.

2.1 channel speakers have an additional subwoofer, hence the .1.

The 3.1 soundbars have a dedicated center speaker, which is great for catching the lows, especially in dialogue-heavy content, where understanding what the characters are saying can become challenging.

5.1 or 7.1 soundbars usually support Dolby Atmos and have individual 5-7 speakers built into the soundbar to mimic surround sound. These can be highly effective in smaller to mid-sized rooms and can be the best option when space and cost are important factors to you.

Speakers are the more traditional audio solution and can provide true surround sound (keeping in mind that you invest in an expensive setup).

While cheaper speaker setups usually consist of 2 speakers, you can invest more in a setup that has 5-7 speakers, which transition into a surround sound setup.

Which One Is Better?

Now that we’ve talked about the basics of speakers and soundbars, let’s talk about which one is better for you.

For both speakers and soundbars, we’ll focus on the factors that come into play when deciding between the two. 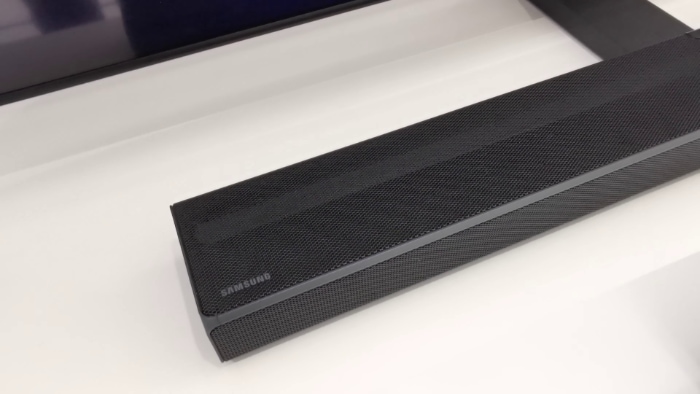 Soundbars are generally better in design since they’re made to be sleek and minimalistic, which is perfect for users who like having minimal clutter on their desks.

Soundbars don’t look out of place on modern tables and might even compliment your monitor with their sleek design. These can even be placed in an overhead cabinet or a space below the monitor.

Nowadays, some speakers have really good designs, but for the most part, speakers are still boxy-looking and much lesser design-wise when compared to soundbars.

When speakers do have some stunning designs, you will have to prepare yourself for the clutter they can cause on smaller desks.

Many users try to have a setup on smaller tables, and getting speakers is better when you have a table that’s at least 5 feet long. I say this because I have a tough time making space on a 4-feet long table since I have a monitor and PC on the table as well.

While you can place the PC on the ground, that wouldn’t be viable for gamers or anyone who has invested in a shiny RGB setup.

Usually, a speaker setup would have individual wires for each speaker, and getting a soundbar would eliminate that by having a wireless option.

Now the most crucial part. Sound.

Soundbars are quite helpful in enhancing the overall sound produced by your computer. This is especially true if your soundbar includes a built-in amplifier as well as a separate subwoofer.

Vocals are well-suited to soundbars. They can successfully handle low to mid-range noises and provide you with improved output.

Low to midrange noises include people’s voices and ambient noises, such as the noise of a door shutting.

These would come via the soundbar, while bass and mid-tones come through the subwoofer. On the other hand, speakers do not separate sound or have a small treble speaker that isn’t as excellent as a soundbar.

This makes soundbars preferable over speakers in several different scenarios. Soundbars are preferable for TV shows and movies because they make it easier to hear and understand what is being said.

This is especially beneficial if you use it for audio editing and Skype calls. YouTube video or video content audio editing is more precise.

For this sort of work on your PC, a soundbar would deliver more than a pair of speakers in the same price range. However, speakers are the better option when the price is no issue. 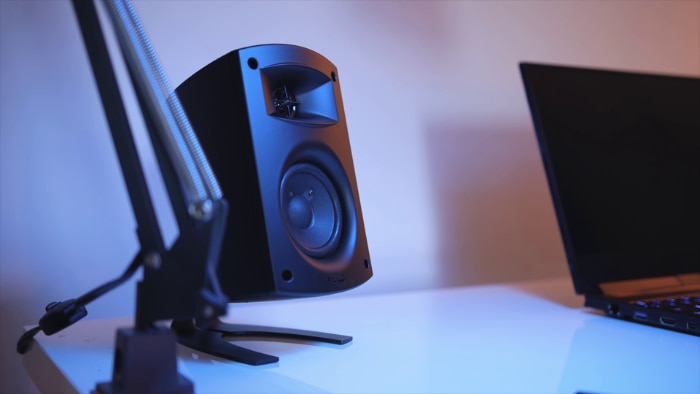 Soundbars are generally the more economical choice when looking for a good audio solution within a budget. An average soundbar costs around $100 but will be much more value for money compared to a set of speakers in the same price range.

Very few speakers can deliver quality sound in the lower price range, and the combined benefits of design and accessibility make soundbars the better choice in this price range.

Surround Sound: Can a Soundbar Compete?

While soundbars can simulate surround sound with the aid of their multiple built-in speakers, a true surround sound setup requires multiple speakers to be placed around the room, a soundbar being one of them.

A soundbar will still be a better option if your TV/PC is placed in a smaller room. A soundbar will be more than capable of providing a powerful sound experience, and an accompanying subwoofer will easily throw out that much-needed bass.

Once you move towards a larger room, a soundbar might not deliver the same sound performance.

We’ve collected some of the best soundbars based on different criteria (quality, cost, size).

A huge soundbar, which is considerably better than even large speaker setups. But this unit is costly. Consider this only if cost is not an issue, and you want an elite soundbar.

Sennheiser’s soundbar is powerful enough not to need its subwoofer. The soundbar is capable of clear, direct language and plenty of detail.

The way the sound is stretched around you provides a fantastic ambiance and pulls you right into the action.

To enjoy the complete Dolby Atmos experience, put the soundbar on the top level of your rack or place it on the top shelf of your rack so that the upward-firing speakers aren’t blocked. But it’s worth the effort.

This is the greatest soundbar with a premium price tag for people who seek genuine 3D sound without speakers.

This soundbar is perfect when it comes to value for money. It delivers solid sound, has ARC connectivity, and is small enough not to take much space on smaller desks.

You also get the added benefit of JBL Surround Sound, a software-enabled surround sound simulator built for simulating 5.1 sound.

The bass is quite noticeable, and though it may not be as much as an overkill setup, it is rich and powerful enough. The soundbar also has a quite neutral sound profile, so we don’t need to turn it up to hear any dialogue.

The middle doesn’t quite equal the richness of the top end, but it glides above the low-end action, displaying a good amount of information.

This is one of the cheapest and most portable soundbars on Amazon, but it holds its own at the price point.

It looks and sounds amazing and fits neatly beneath the monitor. It’s hooked into the headphone jack or USB connection (which powers it).

Although not audiophile-level, the sound is decent for the size and price. Mids and bass are surprisingly decent; however, the highs might sometimes seem muffled.

There isn’t a lot of stereo separation. Build quality is excellent, and the Bluetooth performs admirably.

As computer speakers, they’re a little clumsy—no, there’s a way to connect through USB, so you’ll need both a USB charging cable and an audio wire (or Bluetooth). Creative advises against leaving the charging wire plugged in all of the time.

But for the price point, if all you’re looking for is a cheap audio solution that delivers, this is the go-to.

In the end, it boils down to space and cost. If you have a smaller setup and don’t have that much real estate on your table, a soundbar is more than enough.

The sound quality is good enough, and since you’ll be sitting directly in front of the monitor, you won’t feel that the sound is low.

Moving from the soundbar to speakers, I’d suggest getting speakers only if you’re willing to shell out enough money for an expensive setup.

Hopefully, your query regarding the best audio solution (whether it’s a soundbar or speakers) for your PC is solved, and you’re well on your way to making an informed purchase. Good Luck!